Sleepless In the Retirement Home

Sleep and lack of it is a popular coffee-lounge conversation in the retirement home. It takes me back to sleepless nights caused by business worries in rat-race days. Now I have sleepless nights for no reason at all. Occasionally I give myself a treat and pop half a sleeping pill but I hate the things and I am afraid of becoming addicted.

On Monday night I opened an eye and saw the time: 1:13. No point in going on with this, I thought and went to lie on the couch in the living room and tried to read. About half an hour later I thought I heard voices in the corridor outside our apartment. I opened the door, peeked out and saw my neighbors Morris and Dave disappearing around the corner. I grabbed a dressing gown and went after them.

I didn’t bother to answer. The table-tennis table is in a room off the gym. 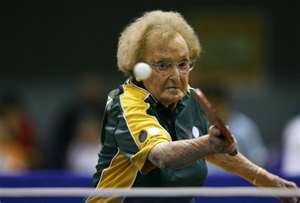 There were a few people standing around and a game was in progress. I looked around and saw a home-made scoring ladder on the wall. At the top of the ladder was another neighbor of mine, Sarah. She only has one eye and recently had a hip replacement job which has returned her to 100 percent mobility. I looked around and there she was, leaning against the wall. She saw me, smiled and nodded an invitation; I nodded back in agreement. Morris and Dave saw the exchange and grinned.

“You’re going to lose,” said Maurice. “She’ll wipe the floor with you. Back out now!”

“Have it your way,” they laughed.

As forecast by my sadistic neighbors, one-eyed Sarah, aged about 80, cleaned the floor with me. She has a forehand shot that is unplayable. She waits for my shot to clear the net and bounce on the table. With her single eye she follows the ball closely. When it is 4 inches above the floor she slices viciously under it and sends it screaming over the net, hitting the table and spinning off to some corner where you can’t get to it. There has to be a way to play this shot…

Now, you wanna know why I can’t sleep at night?